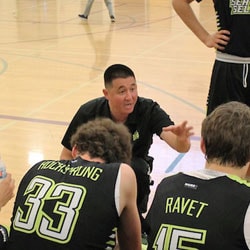 
Chase Young was born and raised in Seattle, where he graduated from Roosevelt HS in 1999. He went on to be a 4 year starter at Occidental College and then overseas in Denmark for two seasons before returning home to Seattle. After returning from Denmark, Chase coached under Bart Brandenberg at Roosevelt HS from 2004-2006 and was the athletic director and lead trainer at Emerald City Basketball Academy for 10 years.  Roosevelt Select was established in 2014 and more recently coach Young started Seattle Select High Academic, which is an elite AAU program geared towards elite student-athletes with high GPAs.  Chase has produced dozens of elite national level teams over the past 13 years and has helped prepare hundreds of players for high school and college.  In addition to coaching and training, Chase runs the West Coast Elite NW High Academic Exposure Camp for HS school elite student-athletes with a 3.5 GPA or higher.  The camp receives prestigious college coaches and scouts from all over the country such as Caltech, NYU, Occidental, Macalester College, Swarthmore, MIT, Carnegie Mellon, Whitman and many others.